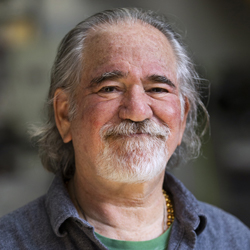 Asangan Binstock and his wife Karuna have been students of Swami Satchidananda for 50 years and served in various roles to further the teachings of Integral Yoga. Recently retired, the Binstocks built a house and art studio in Yogaville. In the future, they plan to donate some of Asangan’s spectacular sculptures to further beautify the grounds of Yogaville.

Asangan was born and raised in the Bronx, NY. His formal fine arts education began in New York’s High School of Music and Art, followed by undergraduate studies in fine art at Hunter College. After teaching fine arts in a South Bronx Junior High School and a year of travel, Asangan settled in Boulder, Colorado, developing sculpture and jewelry of wood, stone, silver, and deer antler. While working at Quest Foundry, he was exposed to all phases of wax modeling, bronze casting, and finishing.

In 1970, Asangan became a student of Yoga and later a teacher and director of the Boulder Integral Yoga Institute. He married in 1971 and had a son named Atman in 1973. His life in Yoga continued at the Satchidananda Ashram in Connecticut beginning in 1974. There he served in maintenance and construction as well as president. He married his current wife, Karuna, in 1979.

In 1980, Asangan and Karuna moved to Maryland. A four-year graduate program at the University of Maryland School of Architecture gave him a new perspective in three-dimensional design. Asangan worked for many years as a Registered Architect and Project Manager in several area firms and at NASA’s Goddard Space Flight Center. He currently shows sculpture of steel, stone, and glass in area galleries and outdoor show-spaces. This ongoing education in construction methods and materials and his studies in Yoga continue to inform his sculpture and challenge his aesthetic directions.