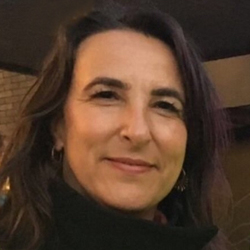 Three Isha Merians, RYT 200, is an attorney and activist originally from Woodstock, New York, and currently based in Brooklyn. A longtime co-conspirator in the fight against white supremacy, Three brings her background in organizing, psychology, gender studies, and Yoga and meditation practices to her work as an activist. Three has traveled the world doing social justice volunteer work with organizations such as Planned Parenthood, the ACLU, Amnesty International, the National Lawyers Guild, and Al Otro Lado, and has served as amicus to two United States Supreme Court cases defending reproductive freedom. Three’s work focuses on gathering other white people and helping them through the process of facing and dismantling their internalized racism so they can join the righteous fight to get all of us free.