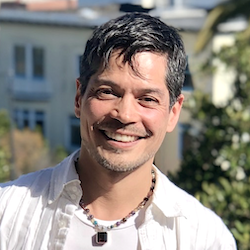 Marc Mukunda Morozumi, E-RYT 500, CMT began practicing Ashtanga Yoga in 2001 while a full-time modern dancer with Joe Goode Performance Group in SF, CA. Due to injury, Mukunda retired from his dance career in 2004 and entered the events industry for a 12-year career. In 2007, he was able to make a 2-month trip to India as a personal journey. After enjoying an immersion at the Sivananda Ashram in Kerala and visits to Auroville and others, he chose to deepen his practice with a teacher training in Yogaville in 2009 with Swami Divyananda and staff. One month after returning from graduation, Mukunda began teaching a Saturday morning class at the SF IYI, which he maintained for over ten years. In 2016, Mukunda left a full-time career as a Project and Operations Manager at a celebrated event design company in SF, CA, to create a full-time life teaching Yoga. Mukunda has co-led Integral Yoga retreats since 2011 and has staffed or co-led Basic Teacher Trainings since 2013. He opened a small Yoga space, M Spa Yoga by YogaMukunda in 2017, followed by initiating the role as the Yoga Director for The Yoga Loft @ MX3 Fitness, SF, CA in 2019.

As a result of the turn of events of 2020, he opened and then reformed a studio: Mukunda Yoga – Activation and Well-being Center in SOMA, SF, CA as a new space to assist Wellness Leaders who wish to record content in a clean, dedicated space and to inspire and sustain practices and conversations around social justice and well-being.