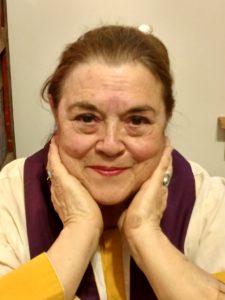 Rev. Dhyani Simonini is a longtime devotee of Sri Swami Satchidananda. She became an Integral Yoga Minister in 1990. She retired from Buckingham County High School, where she taught English, drama, and speech for 31 years and was instrumental in establishing the operation of a student-owned touring theatre company that specialized in public service tours. She is currently captain of the Disaster Action Team (DAT) for Buckingham County through the American Red Cross. Her lifelong love of Native American spirituality led her to become involved with a phonetic transcription of the sacred songs and rituals. She transcribed for Walker Calhoun, sacred firekeeper of the Cherokee nation, and for Doris Riverbird Woman, clan mother of the Lenape nation, who later adopted her and made her legal representative for “all things Native American.” She created a Native American medicine wheel on her property which she hopes will serve as a gathering place for Native ceremonies and, later, intends to create a center for indigenous people on the property.