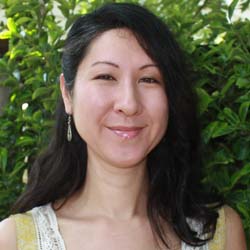 Ranjani Tutia, E-RYT 200, first started out at the Integral Yoga Institute of NYC as a Karma Yogi in 1999 where she served for two years in the kitchen. In 2002, she completed a 200-hr. Yoga Teacher Training and after graduating from the Ashram Yogi Farm-to-Table program in 2020 at Satchidananda Ashram-Yogaville was hired to serve there as Academy Administrator. She has a Master’s degree in Somatic Counseling Psychology – Dance/Movement Therapy from Naropa University and has worked with all age groups doing direct care, art-based workshops and classes, and support groups with survivors of trauma. Ranjani also has an extensive background in activism, working on various environmental/social justice campaigns, and considers herself an artivist. In addition to cooking delicious recipes, Ranjani teaches Yoga Nidra and loves restorative agriculture and dancing.