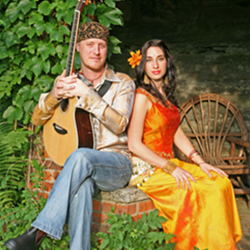 The music of HuDost, the Sufi kirtan, neo-folk, world rock ensemble from Montreal and KY, weaves a seamless tapestry of sound that renders tears and laughter in listeners, cultivating the nameless longing that abides within all our hearts and invokes total celebration. HuDost’s core musicians are Moksha Sommer and Jemal Wade Hines. Having toured the US, Canada, and Europe constantly since April 2006, HuDost has grown and expanded, traveled rocky and glorious terrain, and marveled at all they can learn and explore. Moksha and Jemal Wade, in this time, have grown as artists, as seekers, as a couple, and as a family. In 2013 their amazing son was brought into the world.

HuDost has two recent projects including a world chant Sufi Kirtan album as well as a collaborative record with Steve Kilbey of the Australian band The Church, with special guest Jon Anderson of YES. Both are receiving rave reviews. On past albums, HuDost has worked with Grammy winner Malcolm Burn (Bob Dylan, Emmylou Harris, Peter Gabriel) and Grammy winner Oz Fritz (Tom Waits, Bill Laswell, Primus). HuDost’s acoustic album 4th Way Folk was released in 2013 and received a strong response to positive reviews. Scope Magazine refers to it as “an exceptional folk album that takes the genre in new and beautiful directions.”

HuDost functions as a duo (with the core musicians Moksha Sommer and Jemal Wade Hines) or as a band, incorporating musicians of varying sensibilities and backgrounds, and often includes performance art and dance in their shows. As a duo, their instrumentation includes vocals, harmonium (Indian pump-organ), shahi baaja (electric Indian auto-harp), guitars, bazouki, dulcinet, percussion, and a slew of sonic ambient effects. Their music is a rich, eclectic blend of pop and rock with traditional Sufi music, Bulgarian, Croatian, Macedonian and Balkan folk music, and Farsi, Turkish, and Arabic. Their sound crosses all borders and barriers, taking the listener on a journey they will never forget.