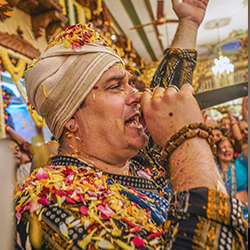 Gaura Vani is a multi-disciplinary artist—fluent in music, film, and visual arts. He is best known for his mantra music performances. Gaura Vani’s events are unifying and transporting—a mix of participatory rhythm and song, story and dance. He has traveled in Africa, the Americas, Europe, Asia, and Australia performing both as a solo artist and with his sacred music ensembles, “The Hanumen” and “Juggernauts”.

Gaura Vani began studying sacred Indian music at the age of six in the ancient temple town of Vrindavan at a traditional Gurukula school. He continues to share the magic he received and performs at festivals like Lollapalooza, FloydFest, Beloved, Bhakti Fest and Wanderlust, as well as eclectic venues like private homes, theatres, temples, and Yoga studios.
Gaura Vani is also a co-founder of Chant4Change, a mantra music festival that took place in Washington, DC, on the steps of the Lincoln Memorial.