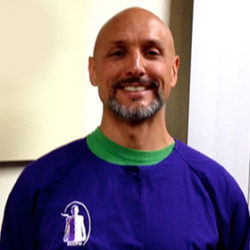 Daniel is a mind-body educator with over 30 years experience. He has worked for over 11 years in the Military Advanced Training Center (MATC) at the Walter Reed National Military Medical Center (WRNMMC) in Bethesda, Maryland. He teaches meditation and adaptive yogic practices for those affected by warfare, severe trauma, and other maladies.

He is the son of Peter J. Hickman, a US Navy veteran of the Iowa-class battleships in the conflict in Korea. Peter experienced more war in Cambodia, Laos, and Vietnam, after becoming a US Foreign Service officer. Daniel’s mother, Elida Lourdes Hickman de Martín Ulloa, was a US Department of State employee. Elida was stationed in several US Embassies in Latin America and often worked alongside military personnel.

Daniel has collaborated with:

In his past life he was an artist-educator, and he performed in multicultural and interactive shows for audiences of children. He worked in the Barns of Wolf Trap, The Imagination Stage, The Kennedy Center for the Performing Arts, and the Discovery Theater of the Smithsonian Institution.

Daniel works with persons spanning the age of 5 to 85 and always meets people where they are. He believes there is no ‘right’ way to do Yoga— there are, in fact, numerous ways to do Yoga, and the best way is for you to find your own way. He is the lead of the Silk Road Sangha and creator of the Multidisciplinary Yoga Teacher Training. He facilitates workshops, seminars, and trainings internationally. His hobbies include traveling and traditional rock climbing.
danielofthesun.com & @danielofthesun (IG)