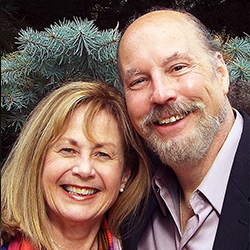 Jonathan is an international authority on sound healing and a pioneer in the field of harmonics. He has worked with masters of sound from both scientific and spiritual traditions and has been empowered by the Chant Master of the Dalai Lama’s Drepung Loseling Monastery to teach Tibetan Overtone Chanting. Jonathan is author of Healing Sounds: The Power of Harmonics, The 7 Secrets of Sound Healing, Chakra Frequencies: Tantra of Sound (co-authored with his wife Andi), winner of the Visionary Award for “Best Alternative Health Book” of the year, The Divine Name: The Sound That Can Change the World, 2011 Visionary Award Winner for “Best Healing Book” of the year and his latest (co-authored with his wife Andi), The Humming Effect: Sound Healing for Health and Happiness. He is director of the Sound Healers Association and president of Spirit Music, Inc. in Boulder, CO. A Grammy nominee, Jonathan has created numerous best selling, award winning recordings including “The Divine Name” (with Gregg Braden), “Reiki Chants,” “The Lost Chord,” and “Ultimate OM”. His “Chakra Chants,” “Ascension Harmonics,” and “Merkaba of Sound” each independently won the Visionary Awards for “Best Healing-Meditation Album” of the Year in 1999, 2009, and 2014. In spring of 2011, Jonathan Goldman was named as one of Watkins’ Mind Body Spirit magazine’s “100 Most Spiritually Influential Living People on the Planet.” He is a lecturing member of the International Society for Music Medicine. Jonathan presents Healing Sounds® Seminars throughout the world.

Andi is a licensed psychotherapist specializing in holistic counseling and sound therapy. She co-authored two books with Jonathan, Chakra Frequencies: Tantra of Sound, winner of the 2006 Visionary Award for Best Alternative Health Book of the Year and their latest, The Humming Effect: Sound Healing for Health and Happiness. She is the director of the Healing Sounds® Seminars and director of the Sound Healers Association. Andi is the developer of Tele-Counsel, the nation’s first telephone counseling service specifically offering homebound clients structured counseling. She has been an educator at international schools in Japan, Germany, and Indonesia and has lived and traveled extensively throughout the world. She is a musician, teacher, sound healer, and the wife and partner of Jonathan Goldman. Together, Jonathan and Andi have dedicated their lives to the path of service, helping awaken and empower others with the ability of sound to heal and transform. They lecture and give workshops worldwide. They live in Boulder, CO, with their son and may be reached at: www.healingsounds.com.