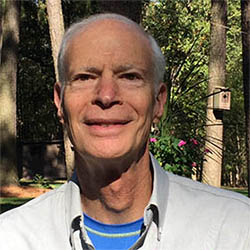 Tom began meditating while in graduate school at Yale University in 1968. He realized he had low self-esteem, lots of anger, and was flunking out of an intense, specialized program. Meditation helped him immensely. He began to understand complicated concepts with new clarity and started healing his personal issues. Tom rapidly became a star student, completing the full Ph.D. program in record time.

In the 1970s, Tom passionately studied meditation and healing with Ram Dass. After a magical meeting with Elizabeth Kubler-Ross at a Ram Dass meditation retreat, Tom started sharing the techniques that helped him so much. He continued meditating and teaching, even when he was the International VP For Cancer Research at GlaxoWellcome (now GSK). Tom teaches internationally, including yearly presentations at the Sivanada Ashram Yoga Retreat in the Bahamas. He also sees clients for individual counseling and visits cancer patients at the Duke Comprehensive Cancer Center. He’s a refreshingly effective meditation teacher and has a special gift for helping people discover the root of their suffering and their path to healing and inner peace.

Tom lives in North Carolina with his wife, JoAnna, who teaches Yoga at their studio, Hatha House Yoga Studio. His teachings are available in his CD, Meditation and Healing and his book, Our Two Gardens: How to Cultivate Healing.