Swami Divyananda Ma, E-RYT 500, has had a wealth of experience teaching Integral Yoga around the world since 1973. She has taught at corporations, universities, the Commonwealth Cancer Center, and for the Dr. Dean Ornish Reversing Heart Disease programs. She has also served as one of Integral Yoga’s Basic Hatha teacher trainers.

Swami Divyananda Ma took monastic vows in 1975 from the great saint and yogi, Sri Swami Satchidananda. Over the years she has served as the director of the Integral Yoga Institutes in Los Angeles, San Francisco, and as Ashram Manager at Yogaville. She also served for ten years as the director of the Integral Yoga Institute in Coimbatore, India; this immersion into the South Indian culture has given depth to her understanding and practice of Yoga.

Now an itinerant monk, Swami Divyananda is constantly “on the road.” She leads the annual Sacred India Tours to sacred sites in India in addition to international Yoga retreats and trainings.
See more at sacredindiatours.org 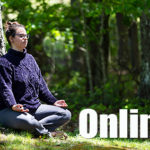 “Meditation is the greatest gift you can give yourself.” — Sogyal Rinpoche Join Swami Divyananda from 12–1 pm for ten days of guidance and practice of meditation. Starting with ten minutes, the meditation sessions will increase to one full hour on the tenth day. Accept this challenge and invite your life to be fully transformed! Whether brand-new to meditation or experienced-but-struggling, these sessions will address your needs and give you the tools and support to sustain and advance a meditation practice. With today’s myriad outside influences, what means most to our hearts can easily get muddled and lost. However, it…