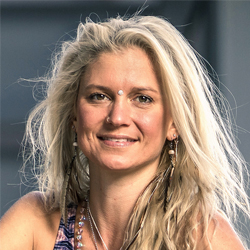 Tara (Becky) Eschenroeder is a certified coach and mentor, self-published author. and an accomplished yogini who was voted one of the top three Yoga instructors by Richmond Magazine in 2015. With some teachers, the lessons are planned, practiced, rehearsed, and perfected to a tee, but Tara Eschenroeder offers a different experience. Teaching was Tara’s dharma long before she realized it. She grew up with a bow and arrow in her hands, learning to pull back with just enough aim and control to send her arrow into the abyss, knowing and trusting it would hit its intended mark. Likewise, she enters each class, each workshop, each lesson, having prepared her body and mind to become that bow that lets her lesson go.

Tara felt the call of her path in 2007 when she first felt the spark of a tiny flame. Instead of approaching that flame with fear of the heat, she chose to approach it with love, stoking the fire that was burning within as a passion for Yoga. By the end of 2009, she received her 200-hour RYT under Arlene Bjork and Grace Yoga Training Systems. She continued to follow what she knew and trusted to be her path, and she obtained her 500-hour RYT through Om On Yoga under the guidance and wisdom of Jennifer Elliott.

Inside the studio, no two classes or workshops are ever the same. Students are not told what to do—they are empowered to listen to their own bodies. While there are general cues throughout class of “warrior” and “downward dog” (almost always accompanied by the Sanskrit name), one is just as likely to hear cues like, “listen to the animal within,” “move through honey,” “ride the wave of your breath,” or an encouragement to “dance.” Her mentoring sessions follow a similar pattern. Mentees are not told what to do, but are instead empowered to listen within. They are offered guidance and an open-minded invitation to explore. Tara’s psychology degree from James Madison University and elementary education license from Mary Baldwin College give her a solid foundation for helping others, but it is her natural instincts and open heart that help students see the best in themselves.

Traveling is Tara’s home, for she spends much of her time around the country holding workshops, retreats, and classes. She has also received additional teaching credentials with Project Yoga Richmond and YoKid Stretch Your Limits, and serves as a proud ambassador for Lululemon Athletica, yet so much of her teaching is done off of the Yoga mat. Tara openly and outwardly lives the teachings that she has been inspired to share. Just as she would encourage a student falling out of a pose to take themselves lightly, she does the same as she navigates through challenges. Just as she would encourage a student to trust themselves as they spread their wings into something new on the mat, she is a living example of trusting what she knew was her calling as she spread her own wings. She approaches life with that same love that she used to approach that initial flame, and she encourages each person with whom she comes into contact to do the same. By doing so, she is living out her truth. 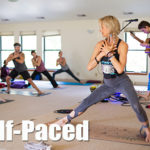