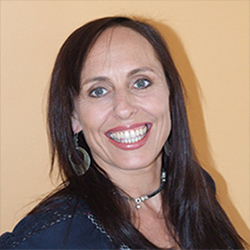 Katchie is an international Yoga and Dharma teacher whose life’s work has been to explore the practices of yoga and dharma and share their path to freedom with others. She has well over 10,000 teaching hours, spanning 25 years as a full-time practitioner and trainer and she has developed numerous approaches to wisdom in body, mind and heart.

Her eclectic background includes Yoga certifications in Anusara, Jivamukti, Integral, and Ashtanga by Richard Freeman and many years of practice with Buddhist teacher and author Jack Kornfield. A former dancer in Switzerland and Brazil, she moved to NYC in 1990 where she studied Yoga for Dancers at White Cloud Studio, attended acting school, and earned a living as a performance artist. Her journey with Yoga began with Sharon Gannon and David Life at Jivamukti Yoga Center.

Deeply inspired by their creativity, activism, and commitment to nonviolence, Katchie dedicated herself to Jivamukti Yoga and taught there for many years, eventually as a senior teacher. Krishna Das was just beginning his weekly kirtan sessions at Jivamukti, and through him and his devotion to his guru, Neem Karoli Baba, Katchie was introduced to the path of Bhakti Yoga and thus began her lifelong devotional practice of chanting.

Katchie also connected with the Integral Yoga Institute in New York City, where she taught, worked, and participated in the Integral Yoga lifestyle under the guidance of Swamis Asokananda and Ramananda.  There she received certificates for completing Integral Yoga teacher training levels 1 and 2.

To further her skill as a teacher, she studied technical refinement of asanas with Kevin Gardiner in the tradition of B.K.S. Iyengar.

Katchie first met Richard Freeman in New York City in 1995. Fascinated by Richard’s sophisticated knowledge of Yoga, Katchie moved to Boulder in 1998 to study with him. She taught at The Yoga Workshop and helped set up Richard’s first three-month teacher training, which she completed in 1999. His dual approach to Yoga practice using a deep knowledge of the inner workings of Yoga and his incredible skill of physical practice made a deep impression on her.

Katchie was immersed in Anusara Yoga from its early existence and was a dedicated student until 2012. She was captivated with the elegance of the system and its life-affirming tantric philosophy. She became one of the first Certified Anusara Yoga Teachers in the San Francisco Bay Area in 2004. Katchie was the co-founder and director of Yoga Sangha, a studio in San Francisco’s Mission district, dedicated to Yoga and Dharma. Under Katchie’s guidance, Yoga Sangha became a beloved community center and attracted students who shared awareness about world issues.

In 2007 Katchie launched the powerful Spiritual Activation Series, a forum through which the Yoga community could connect with well-known authors and activists such as John Robbins, Jack Kornfield and Julia Butterfly Hill. The goal of the series was to raise awareness about human and animal rights, the environment, social justice, and highlight the interconnectedness of Yoga and Dharma. In this same spirit, Katchie volunteered for many years at San Quentin State Prison, teaching Yoga and Dharma to long-term inmates. Her leadership and example in Yoga and social change prompted Yoga Journal to name Katchie one of five top Yoga teachers making change in the world.

Katchie has studied closely with her Buddhist teacher Jack Kornfield since 2000 and skillfully weaves the insights of her Vipassana practice into her teaching. With senior Dharma teacher Wes “Scoop” Nisker, she offers retreats and workshops at Spirit Rock Meditation Center and Esalen Institute. Katchie has brought her humor and stories to conferences, festivals and workshops all over the world and is loved by her students for her authenticity, sense of humor, wisdom and deep compassion. She lives in Santa Fe, New Mexico, with her husband Joshua and dog Leelou.