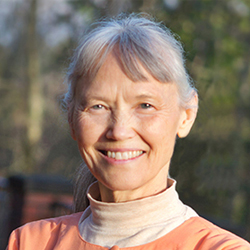 Swami Vidyananda began practicing Yoga in 1969 and has been teaching Integral Yoga® and training Yoga teachers since 1973. She became a swami (monastic) in 1983. She has taught and trained Yoga and Stress Management teachers throughout the US and Canada, as well as Australia, Europe, and India.

She presently lives at Satchidananda Ashram–Yogaville, VA, where she teaches all branches of Integral Yoga, including Hatha, Raja, and Jnana Yoga, meditation, and yogic lifestyle. She continues to travel widely, training Yoga teachers and offering workshops on meditation, stress management, Yoga and the emotions, and mid-life meaning.

Before becoming a Yoga teacher, Vidyananda worked as a broadcast news producer and reporter. Since 1983, she has produced and edited dozens of Yoga videos and audio recordings for Integral Yoga including the best-selling Yoga with a Master with Swami Satchidananda. Vidyananda herself is featured in audios and videos, including Yoga for Stress Management, Hatha Yoga for the Emotions, and Deep Relaxation and Guided Imagery for Healing.

Over the years, Vidyananda has taught Yoga for many different populations, from college students to corporate managers, and children with Down syndrome. She has taught Yoga in therapeutic programs such as the Smith Center Cancer Retreats and Yoga for persons with eating disorders. She co-developed the Integral Yoga Stress Management Teacher Training. She trained as a hospital chaplain and is a certified Yoga Therapist. Vidyananda founded the Integral Yoga Teachers Association (IYTA), and currently serves as chairperson for the Integral Yoga Teacher’s Council.

Swami Vidyananda served as director of the Montreal Integral Yoga Institute. For many years she traveled with Sri Swami Satchidananda, serving as his French translator. She taught and translated at the European Yoga Union Conference in Zinal, Switzerland, for ten years.

Vidyananda’s wisdom and heartfelt enthusiasm have made her one of Integral Yoga’s most widely traveled teachers. She has a practical approach to Yoga and spirituality, making it real for everyday life.