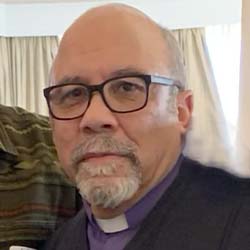 Reverend Paul Wilson was ordained as a Baptist Minister at the age of 18. Pastor Paul graduated from Virginia Union University and has his Masters’s in Divinity degree. He has pastored Virginia churches since 1972 and he is currently pastor of Unity Grove Missionary Baptist Church in Buckingham, VA. Before that, Pastor Paul was Pastor of Union Hill in Baptist Church in Buckingham County for 21 years. He is an environmental justice activist and one of the key people who helped shut down the pipeline project and compressor station in Buckingham. He is also a member of numerous civic professional social organizations. He is also a 5th generation owner-operator of Family Funeral Home Business, which has existed since 1867, one of the oldest in our country and the oldest minority-owned businesses in the state of VA. Pastor Paul resides in Amelia County with his wife, a proud father, grandfather, and great grandfather.