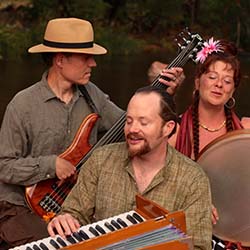 New Orleans’ Seán Johnson and The Wild Lotus Band create a universal style of spiritual music filtered through the depth, sincerity, and soul of their own American and ancestral roots. Their music merges conscious lyrics, sacred chants from the spiritual traditions of Yoga and beyond, and roots, rock, gospel, and global grooves. They are known for creating interactive, soul-stirring songs to dance and sing along with as well as to grieve and heal.

In 2005, Seán founded the band as a post-hurricane Katrina philanthropic music project, raising funds across the country for relief from the devastation of the storm. The theme of searching for grace and inspiration amidst challenge and destruction has permeated their music ever since. In 2007, they released their first album, Calling The Spirits, which caught the ears of pioneering Canadian record producer Terry McBride, founder of Nettwerk Records and Lilith Fair. McBride signed the band to Nettwerk for the release of their follow-up album, Devaloka. When Putumayo World Music founder, Dan Storper heard Devaloka, he chose music off the record to be featured on Putumayo’s first compilation of music designed for Yoga. Inclusion on three Putumayo albums has helped propel the band’s music to listeners across the globe. Their last album Unity debuted #1 on the iTunes World Music Chart and #3 on Billboard. Their upcoming album Mystery will be released on October 29th on Be Still Records. They are a favorite headliner at conscious music festivals across the U.S. and have played The New Orleans Jazz and Heritage Festival on multiple occasions.

In addition to being a musician, Seán is also a respected Yoga teacher and teacher trainer who teaches at conferences and retreat centers internationally including Yoga Journal, Kripalu, Bhakti Fest, and The German Yoga Conference. He is the founder of Wild Lotus Yoga in his beloved hometown dubbed “New Orleans’ Home for Heart-Centered Yoga,” and Soul School, an interdisciplinary Yoga teacher training program that focuses on teaching Yoga with skill, heart, and imagination. He has a Master’s degree from The Naropa Institute-Oakland with focus on teaching chant as spiritual practice, apprenticing there with south Indian musician and teacher Russill Paul, author of The Yoga Of Sound He is the co-curator and coordinator of Putumayo World Music’s Yoga music series. Seán is passionate about his Irish roots and ancestry, a pillar of his spirituality. He co-leads online Celtic Spirituality gatherings and retreats in Ireland each year with his friend, Ireland native Mary Meighan, founder of Celtic Journeys. 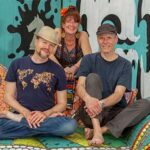